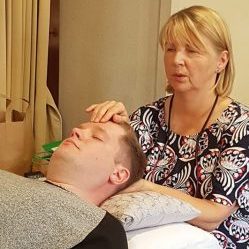 “I’m not going to lie I was skeptical, it didn’t make any sense what so ever to me, how could someone touching your head in various different places change the way you feel about something, but I thought sod it, even if it’s just a nice lie down for half an hour – it was a taster session at a local fair.

I lay on the massage table with a pillow under my knees and covered in a blanket, she placed one hand on the back of my neck and three fingers on my forehead. It wasn’t unpleasant but a little weird. I closed my eyes and just concentrated on my breathing. Now normally when you close your eyes you see the light reflecting of surfaces around you to create patterns, I was staring straight up, and it was like I was watching a David Attenborough documentary on sea creatures. Colours started to pulsate and move and manipulate each other and I felt my body completely relax. As she moved her hands other spots on my head the colours changed from deep fiery reds to more mellow shades of orange, I could hear shouting in the distance that was coming from inside my head. I don’t know what it was saying but I knew I didn’t like it, however I still felt completely calm. As the session went on and she moved her hands to ‘energy points’ on my head, the colours changed and gradually became calmer and cooler. I also became aware that beneath the colour was the abuse I had suffered in a past relationship, and the voices I had heard earlier were him. I eventually began shaking but I still felt calm. It was one of the most bizarre moments of my life.

That was 9 months ago now, I no longer have nightmares, and I no longer live in fear. I have no idea how she did it, but something had shifted, something my therapist and a counsellor had never managed to do, she did in 30 minutes. It truly is magic.

I have my Bars® run every few months now, in full sessions (between an hour and an hour and a half) and every time it is different. One session I saw a series of adverts from the 80s I hadn’t thought about in years – Anthony Stewart Head advertising Nescafe, “All because the lady loves Dairy Milk”, an advert for heating with a cat and the song ‘Fever’ playing, and an advert for somewhere like Hoseasons – a cabin on a lake with a family being all happy. The only thing that these adverts had in common to me was an old VHS I had of Alice in Wonderland I used to watch a lot as a child, I wanted to be Alice so badly and have adventures. Why was my mind showing me this? My conclusion was I was at a crossroads in my career, so I had faith in my subconscious and I jumped career paths. I’ve never been happier in my job.

It’s not life changing every time, sometimes it simply clears the mind and allows you to think better by clearing that brain fog. Stress vanishes, emotions are easier to handle – the list goes on. I’ve also had my Bars® run by different people and I can tell the difference, my conclusion is their energy is different and therefore the freeing of my energy is different.

Even if you’re skeptical like I was, try a taster session – it’s usually very relaxing and it might change your life!”

Taster sessions are available throughout the year.

We run a free taster at Calon FM, Glyndwr University in Wrexham the last Thursday of every month, 10am till 4pm and quarterly at the Rainbow Biz, Mind Body and Spirit fair at Theatre Clwyd, Mold.  Keep an eye out on the events page for other events happening.

If you fancy a full session drop me an email deniseoliver@devaempowerment.com

With ease, joy, glory, and gratitude